Did you have too much fun last night?  Are you hosting brunch this morning but you hate champagne?  Do you just love tomato juice?  Then order up a savory and spicy Bloody Mary, often called the "world's most complex cocktail."
There shouldn't be anything so complex about vodka and tomato juice, but elaborated recipes have been challenging bartenders to create opulent and wild versions for decades.  Common ingredients include Worcestershire sauce, Tabasco sauce, beef consomme or bouillon, horseradish, celery, salt, black pepper, cayenne pepper, lemon juice, and celery salt, all served in a tall glass, often over ice.  Garnishes include celery stalks, limes, lemons, carrot sticks, huge jumbo shrimp, basil, crabmeat, parsely, cherry tomatoes, green beans, olives, hot peppers and even scotch eggs.

The Bloody Mary was invented by a French bartender named Fernand Petiotin in Paris in the early 1930s.  He came to New York and brought the recipe to the King Cole Bar where it became an instant cocktail star.  A visit to the King Cole Bar (in the equally-elegant St. Regis Hotel) will grant you the pleasure to see the famous three-paneled  “Old King Cole” mural by Maxfield Parrish.  If you're in New York City this summer, treat yourself to a Bloody Mary and a huge basket of sugared almonds at the King Cole.

If you're looking for a refreshing, crowd-pleasing drink to serve at a party -- especially a daytime event -- consider the wonderfully fun and complex Bloody Mary. 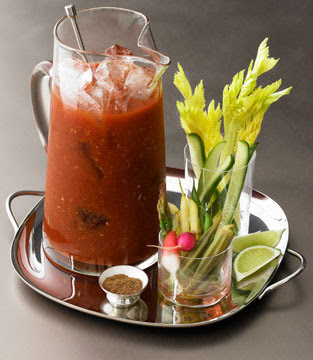