The holiday season is benchmarked by many things to me.

But this classic ballet set to Tchaikovsky's exhilarating score is the most elegant of Christmastime traditions.  Many people say it's slow and a bit schmaltzy, but I'm a sucker for 'The Nutcracker.'  I've attended countless performances of the ballet by different dance companies in many different venues.  No matter if they're local children or world-renowned ballerinas, the performers always tug at my holiday heartstrings through dainty dances and the wonderful plot of this classic story.


If you have a chance to see this classic Christmas performance (and there's probably one in your area), support the Arts and treat yourself to this magical tale with superb orchestral score.
Cheers,
Whitney

Despite being a major Christmas person, I opted out of getting a tree this year.  My husband was shocked that I didn't want one.  I'm not completely sure why I'm not feelin' the tree this year, but perhaps this fantastic, award-winning little film nods to my apprehension.

How lovely are thy branches.....
Cheers,
Whitney
No comments:

When I was in design school at the New York School, I took a terribly difficult lighting class that challenged my embarrassingly basic mathematics, physics and chemistry knowledge.  Through the semester, I learned so much about the science of light, about color temperature, kelvins and electric wattage.  But perhaps most importantly, I learned about the importance of lighting placement.  Yes, we all know that lighting is more than the basic builder's-grade flushmount popped into the ceiling of a hallway or kitchen.  It's about creating zones of light: Overhead, Task and Ambient.

In a project for that Lighting class, I designed a magnificent beam ceiling for a private club of a racetrack.  The room was to resemble the interior of an equine barn, and so I used an open-truss ceiling, with the beams of the structure fully exposed in their structural glory.  As it was a lighting class, I devised a system so that the room's overhead lighting would be built into the beams. Man, I love wood beams...

Of course I have emphasized my love of exposed beams on this blog, as well as the cozy cool look of the American lodge, but let's take yet another look at extraordinary ceilings.  The exposed beam truss ceilings shown here give me goosebumps.

Up In The Season

I've been caught up in the Season of Christmas, hence my absence from the blog.  Between nursing a three-and-a-half-week-long head cold (three and a half weeks, people!) and managing the shopping/wrapping/sending gift mission and, oh yeah, work, I've neglected CYAH for over a week.  Shame on me.

But I come back bearing gifts... FREE printable gift tags for your holiday gifts.  There are many artistic, crafty and downright adorable bloggers & artists on the web who have generously provided their art for free download this season.  So why buy those tiny sticker tags or pricey cardstock options when you can print them out for free on your own paper at home?  Any of these will add an extra crafty panache to your gifts this year.
﻿﻿﻿﻿
﻿
﻿﻿﻿﻿

I've been experiencing some bizarre sleep patterns of late. Some nights brutal insomnia, but some nights college-student sleepiness. Oh well, perhaps thinking about dreamy beds, like the one below, will send me back to the land of usual sleepers. 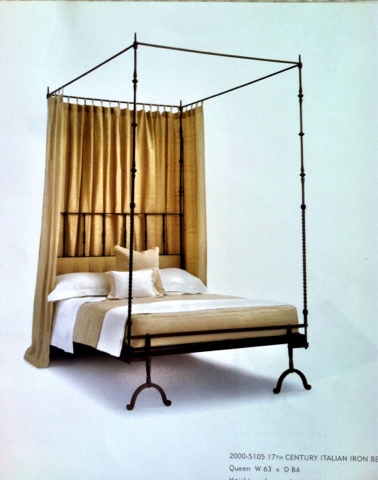 Oddly, I don't even know the source for this bed.
The tearsheet is in an inspiration folder without a manufacturer tag.  Anyone know it?

In the early 1900s, the John D. Rockefeller family commissioned society architects Delano & Aldrich to complete a country retreat in New York's Hudson Valley.  The result is Kykuit in Pocantico Hills, a traditionally designed Beaux-Arts manse in Classical Revival Georgian style.  I love this house; you might be able to imagine why...

A study in symmetry, the 6 storey structure draws inspiration from Italian Renaissance and French Norman houses.  Kykuit, pronounced ky-cut and meaning ‘lookout’ in Dutch, was a shining example of Delano & Aldrich's dedication to grandiose scale & form.  The structure took six years to complete, then almost immediately underwent a series of renovations for the family to move in during the spring of 1913 The intricate and immaculate gardens were designed by the landscape architect William Welles Bosworth with input from designer Ogden Codman (who also decorated the interiors).

One of John D. Rockefeller's personal mantras was "Order and Balance."  He was an incredibly gifted businessman who thrived in organized and disciplined environments.  Perhaps this country home served as a balance between the order he so craved and the natural beauty of riverfront nature.

The last family occupant, Nelson Rockefeller,* bequeathed his one-third interest in the estate to the National Trust for Historic Preservation upon his death in 1979.  Tours are available through the Hudson Valley Historic group.


﻿ ﻿ If you have a chance to visit this gem, do so while the Westchester foliage is still hanging in there!
Cheers,
Whitney

* Interesting side note via Wiki: "In late 1946, a portion of the estate was proposed as the site of the UN Headquarters, when New York City was trying to beat off strong opposition from Philadelphia and San Francisco and secure the organization. Two of Junior's sons, John D. 3rd and Laurance both offered their estate residences, Rockwood Hall and Fieldwood Farm, respectively, for the site of the building. Junior -- who was living in Kykuit at the time -- although appreciating the generous gesture, vetoed it on the grounds that the estate was simply too isolated from Manhattan. He subsequently sent his second eldest son, Nelson, to buy a proposed 6.9-hectare (17-acre) development site along the East River which he then donated for the headquarters."  Huh.
No comments: