I saw this fantastic iron Klismos-legged Maison Ramsey coffee table on eBay and nearly gasped in delight.  Isn't it terrific? I'd put a pane of glass on it, maybe a tinted glass.  Pink hued tinted glass, even.
﻿
﻿

The klismos is one of the oldest shapes in the history of furniture. The shape dates back to the 5th Century BC, when the design was perfected as a chair by the Greeks.  The chair had four curving, splayed (oft called "saber/sabre") legs and curved back rails with a narrow concave backrest between them. 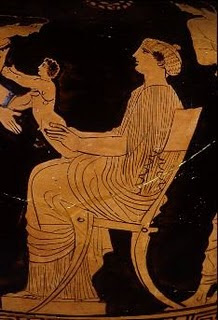 Often illustrated on Greek pottery, the design was resurrected in the French Directoire, Empire, English Regency, and Duncan Phyfe styles. Most klismos-inspired pieces have flaring saber legs placed in opposition to one another, though many interpretations will have only two rear saber legs.
No original Greek chairs survived into modern times. However, the Greeks left a rich history of sculpture and paintings depicting the chair. One of the most famous sculptures depicting the chair is of Poseidioppos, resting on a klismos while holding court in Athens.
The klismos shape might have faded into history were it not for the excavations at Pompeii and Herculaneum in the mid-18th century. The discovery of Greek and Roman ruins sparked the Neoclassical revival in Europe.  And since then, the klismos style stands as one of the most frequently reinterpreted shapes in furniture making.  The well-proportioned shape and graceful silhouette adds a timeless elegance to a room, be it a set of chairs around a table or a lone bench used as an occasional perch.

you like the Greek stuff ? check this site out. www.markharmanfurniture,co,uk